For lots of young people, prom is one of the most important events of their high school career. But historically, prom has been an uncomfortable and exclusionary event for many queer people. Even this year, gay couples have been banned from prom or punished for trying to attend and trans and non binary folks struggle with what to wear.

Here’s some of our favorite prom photos from LGBTQ+ teens around the country this season.

•Not only did I win prom king but I had a pretty b(RAD) date • thank you so much to everyone that voted me I had absolutely no idea and I never expected this many people to not only accept me but embrace me I love you all! My senior year has been the best and I’ve acquired some pretty great friends. #promking

This couple tried to subvert the heteronormativity of prom’s traditional king and queen with a Change.org petition:

i’m sick of straight preppy people always getting voted for everything in this school. support LGBTQ+ people and go vote for me and mal for prom king and queen ;)

Sameer went to prom in a gown and makeup because “I hate wearing guys’ formal wear. It was so fun to creatively express my gender through my clothes, shoes, nails, jewelry, and makeup, and I hope I made people think about how useless traditional gender roles are!” 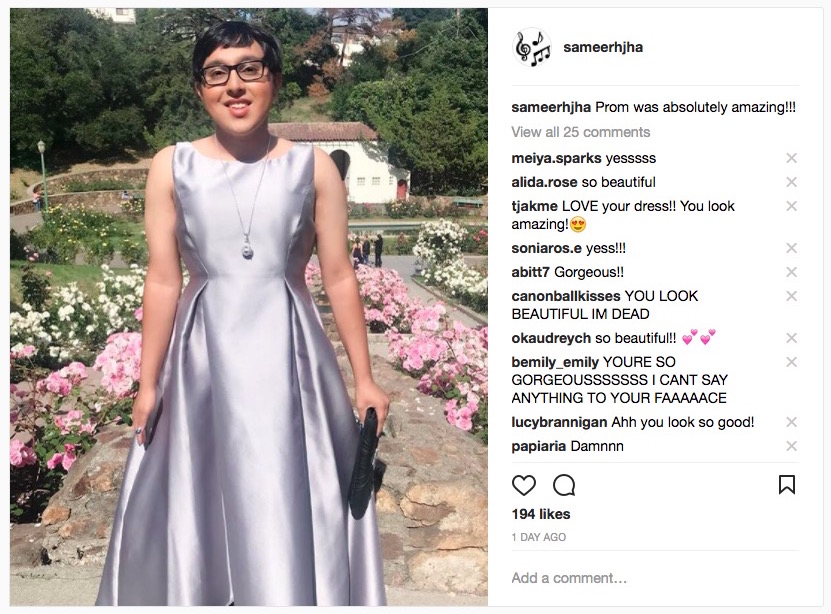 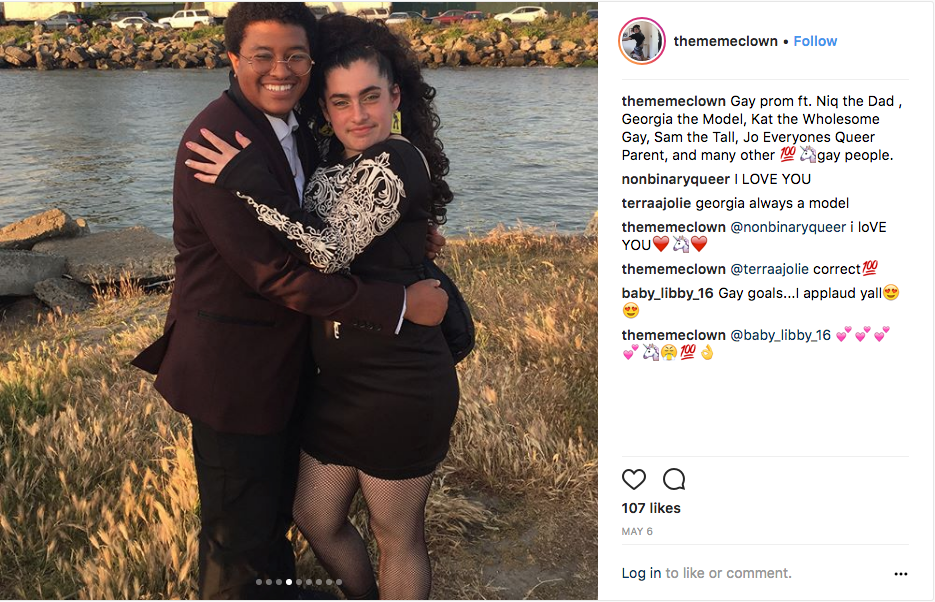 Queer or gay proms are another option for LGBTQ+ youth wanting to party and can be a safe haven for those who are trans or gender nonconforming.

The Berkeley punk venue 924 Gilman held their 2nd annual “Pride Prom.” The event featured many queer and trans performers and sought to be accessible and substance-free. Activist Eli Erlick posted about it on her Instagram as a second chance to enjoy the prom many in the queer community had never had.

Just went to my first prom ever! I may be 5 years late but it’s so important that these events exist. Like many other trans folks, I had to miss my high school prom. Thankfully, I was allowed to attend but was lobbying that weekend and couldn’t make the event. Many queer and trans youth are still denied the ability to go to parties/dances at all. If queer and trans youth aren’t outright denied entry to cishetero events, most queer and trans spaces involve alcohol or bars. We desperately need more space for QT youth to meet each other. Society keeps us out of power by separating us. They know we’re stronger together and youth have an important role in movements that nobody else can fill. It’s our responsibility as 21+ queer/trans people to make sure these spaces exist and are accessible for all. . . . . . . . . . . . . . . . . . . . #suited #fashion #transwoman #trans #transgender #transition #undercut #tomboy #transboy #transguy #transman #mtf #ftm #androgynous #androgyny #androgynousstyle #tomboylook #genderfluid #nonbinary #genderqueer #dapper

If you have any doubts about your rights for prom, check out the ACLU’s guide to prom.